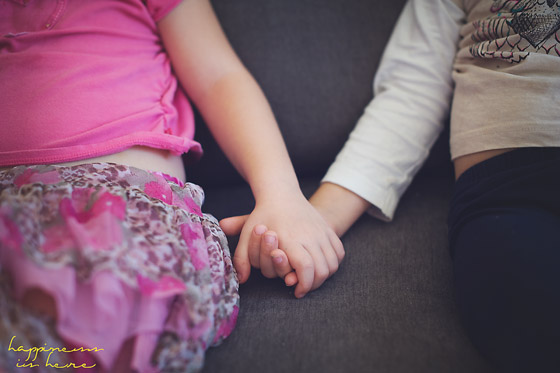 This is the first post in a series documenting everyday parenting moments. I’m not sure about you but I like reading real examples of parenting and how they played out in different situations. Sometimes it’s easy for me to know what not to do, but a little harder to know what to do instead. A lot of times I don’t get it right, but sometimes things work out really well, so I thought it would be worthwhile recording them. For me, it will be helpful to reflect and look back on these moments, and who knows maybe other people might find it helpful too? I don’t pretend to be an expert at all, only an expert on my own kids. But I do like to talk about parenting with others, and share ideas and experiences.

I have noticed lately in our home that my two oldest daughters had been fighting a lot more than usual. Fighting over toys, swings, the pink plate, who gets which chair at the table, anything! It’s not much fun living in a house with people fighting all the time and it was really making me frustrated. I was losing my patience in dealing with it and instead of helping them find solutions I was just telling them to quit it and separating them. Even their baby sister was getting fed up. When they would start fighting she would start yelling at them too and sometimes get upset and start crying. Something needed to change! I knew I could work on reacting better myself but wasn’t sure what else to do. So, I decided just to talk to them about it.

I think sometimes people think if you don’t use punishment and rewards then children will end up spoilt, selfish, and running the house with no boundaries. People forget that it’s not one extreme or the other. Not using punishment doesn’t mean you just leave them to it. When you notice something you’d like to change you can just talk to them about it and work out a solution. Chances are they don’t like the way things are going either.

So after dinner one night we talked…

Me: ‘I’ve noticed there’s been lots of fighting lately and people haven’t been speaking very kindly to one another. Have you?’

Me: ‘I think we should all try and speak more kindly to one another. The people who live in this house are the people we love most in the whole world so shouldn’t we always try to be as kind as we can? It doesn’t feel very nice when people speak to others meanly’.

Miss 6: ‘Yeah, I think so. Sometimes I just feel really frustrated and angry when someone isn’t listening and I say mean things but I don’t mean it’

Me: ‘Well remember, it’s ok to feel angry or frustrated. It’s just not ok to let your anger hurt someone else, like when you hit someone because you’re angry’.

Miss 4: ‘Yeah, we can be angry but we just gotta talk about it’

Me: ‘What else could you do if you’re feeling angry?’

Miss 6: ‘Try and calm down and speak calmly’

Miss 6: ‘But sometimes that doesn’t work’

Me: ‘What could you do if that doesn’t work?’

Miss 6: ‘It’s like that book how people can be a bucket dipper. Maybe we could tell each other if the person is emptying our bucket!’

Miss 4 (very seriously): ‘And a bucket dipper is called a bully!’

Me: ‘Oh the book about how everyone has an invisible bucket?’

We talked some more about the book and what happened in it and decided to find it and read it later.

Me: ‘So we all agree that we want to try and be more kind to each other then?’

Me: ‘Ok let’s do it. Let’s try to use kind voices, try to listen to each other more, and try to work out our problems without fighting and yelling at each other’.

Them: (smile lovingly at each other and hug like we’re at the end of some kind of cheesy movie). 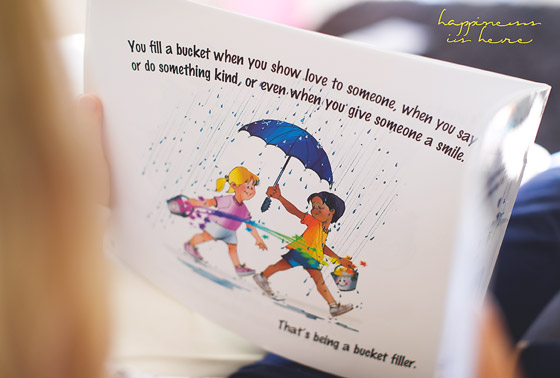 The next morning I reminded them of our conversation and we read the book ‘Have You Filled a Bucket Today?’ The day went SO much more smoothly. There were still arguments but they were resolved in a much more peaceful manner. Because we had talked about the problem together and they had been involved in coming up with solutions they were just as committed to making changes as I was. A few times through the day when one of them was starting to get frustrated I heard the other one tell them ‘remember, kind voices, talk calmly’, and the other would take a breath before explaining the problem.

There was one fight which ended in Miss 6 storming off in tears to her bedroom, but she returned 10 minutes later with a hand written note for her sister that read ‘You have really emptied my bucket’. Miss 4 ran and grabbed a pen and paper and asked me to write a note back for her saying ‘I have an idea that we can all play together’. Problem solved!

Since then, things have continued to be better than they were before. Less fighting, and more productive problem solving. Of course, I had to do my part too with my reactions whenever a disagreement happened. There have been times when things have not gone so great, but on the whole a big improvement! We’re all on the same team and working together to change things.

It’s not always such a simple solution to a problem, but sometimes you can just talk to them. They are little people after all and they often have great ideas!


Sometimes it is hard to step back from the emotion of the moment to see the simple way we can respectfully engage to make things better. Such a lovely reminder of this, and that little people have big ideas too.


LOVE this post!!! I look forward to more real life real people stories like this. It is a huge help. I am so glad your girls were so communicative with you. You are doing an awesome job.


I love this! 🙂 Thanks for sharing. PS. My favorite part is the “you have really emptied my bucket”-note. Aww.


I know, was soo sweet lol


I found the book ‘Siblings Without Rivalry’ to be a really great book on this issue, with good advice on how to positively approach sibling disputes as a parent and how to help foster positive problem solving between siblings. It helped me get out of a rut with fighting between my children who were starting to push each others buttons too often!


We are bucket lovers here, and rarely a day goes by without referring to that book! Looking forward to following your new series 🙂


I love your blog! I have nominated you for the Real Neat Blog Awards
http://joyfulmudpuddles.blogspot.ca/2015/04/joyful-mud-puddles-blog-award-nomination.html


Very true about the little people.. Love your blog!


Really love this! Well done you 🙂
We love family meetings at Parenting Success. We find that leading with an ‘I message’ really helps to get the kids problem solving.
‘Mummy doesn’t like it when you two argue, as I know you really love each other. When you argue I get sad and tell you off. I don’t like shouting. How can you help Mummy shout less?’.
You’ll definitely get their buy it to any solution – as they are creating the solution!
It’s amazing.
Keep up the good work! x

First week of our advent activities going well! We