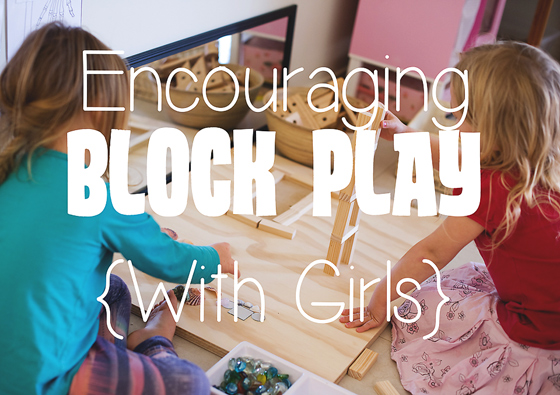 I am not big on gender stereotypes and I try to provide the girls with a lot of different materials that are not gender specific, as well as some that would generally be considered ‘girl’ and ‘boy’ toys. And yet, they still end up mostly playing with the more ‘girly’ toys. When they were younger, the blocks on the shelf at first remained untouched, much to my dismay. There are so many benefits to block play, so I wanted to encourage it as much as I could! Block play promotes practice of many different skills such as:

So you can see why I really wanted to encourage them to use the blocks more. And yet, the only time I would really see the blocks used was when we had little boys over to play. They would head straight for the blocks!

I am happy to report though, that after making a few changes, block play is a daily occurrence here. They spend a lot of time making very elaborate creations daily! And so I thought I’d share my tips for anyone who had the same problem as me, to encourage the little girls in your life to play with blocks.

If I wanted the blocks to be a bigger part of their play, I decided I needed a more permanent area for building. I set up an inviting area near where they usually played, and they were immediately drawn to it. 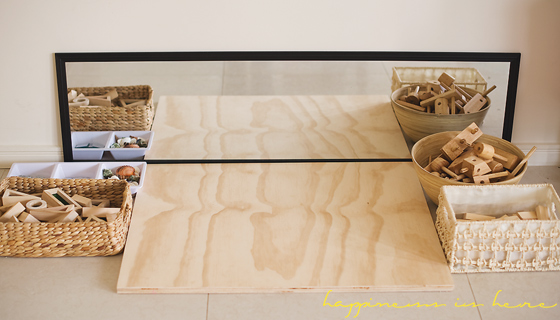 The main thing I wanted was a flat surface to build on that was big enough for the two of them to use at once. My husband cut up a bit of wood he already had and sanded it a little and that’s all there was to it. I like the natural wood surface, it makes such an inviting canvas. I placed it up against the wall but the space felt very closed in so I picked up the long mirror from The Reject Shop for only $10 and it made such a big difference. It feels so much more open now and also adds another dimension to their creations. 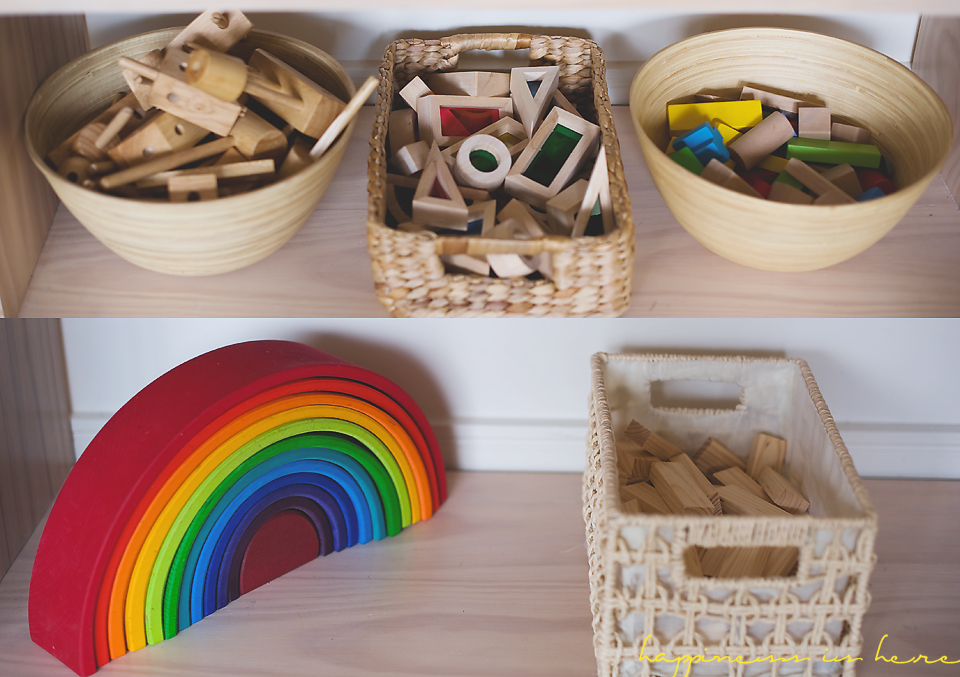 I originally had the blocks on the shelf in the play room in containers, and they were largely ignored. I have since moved them to open bowls and baskets and they are now much more accessible.

We started with your regular wooden blocks of a few different shapes, but our collection has now grown and we are still adding to it. The girls very rarely use just one type of block while building, preferring to combine them all.

In the photo above we have natural construction blocks, rainbow blocks, imaginarium blocks, Grimm’s rainbow stacker (large), and some jenga blocks.

Set out the blocks at night

The block baskets usually live on the shelves and the girls bring them down next to the block area to use. However, sometimes I will set out some blocks at night with some other materials for them to find in the morning. It’s usually the first thing they go to.

Combining loose parts and other materials with the blocks has been one of the most effective things in encouraging more block play. They are not interested in only building with plain blocks. These girls need to decorate! The things they love to add to the block area most are: 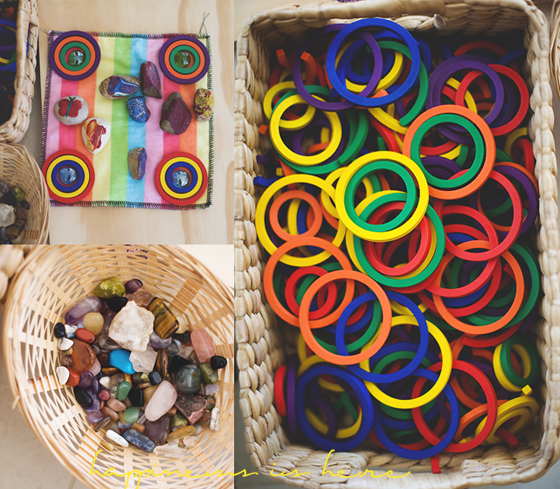 Most of our loose parts are picked up very cheaply from discount stores. 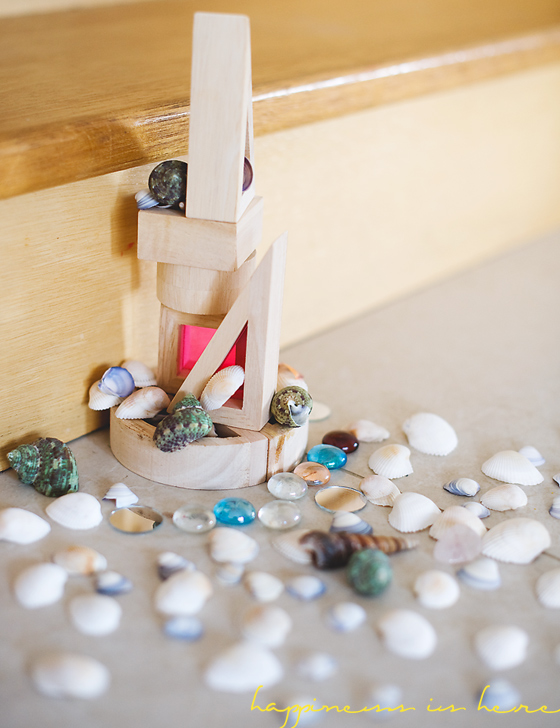 Little treasures like this are to be found all around our house. Each piece very carefully placed. 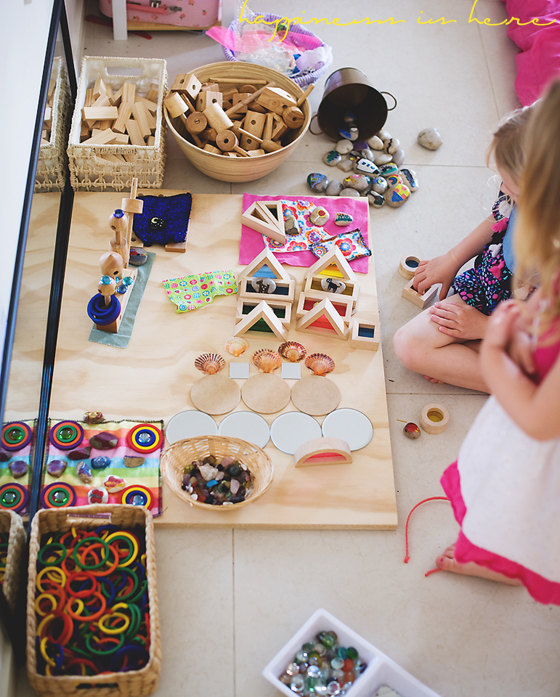 When loose parts are added, the block space comes alive with creativity.

Little pieces of fabric scraps and lace become water, the night sky, mud, a flower patch, rainbows, and much more with a little imagination. 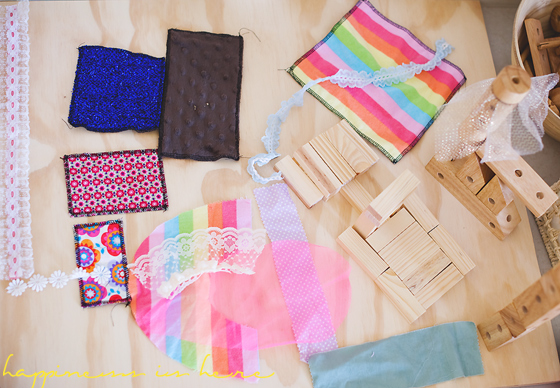 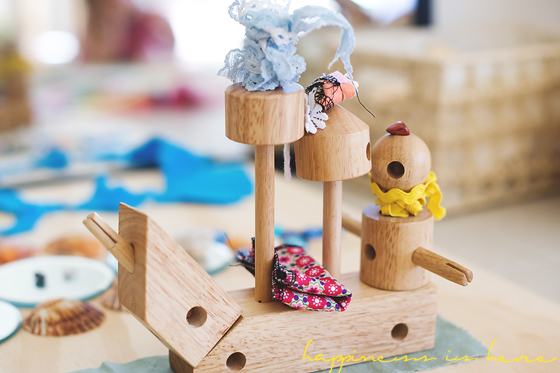 Fabric is used in block creations in one way or another, every day. 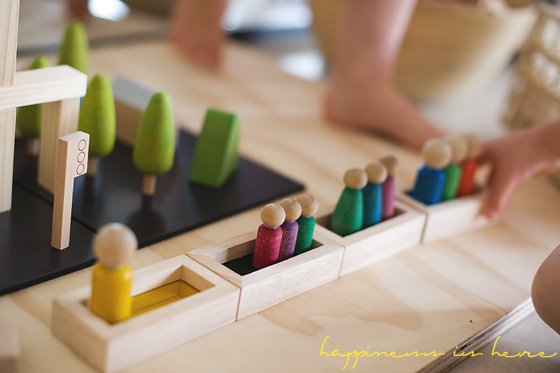 Adding figurines to the block area has also been really effective in encouraging more block play, along with imaginative play and story telling. They can spend a long long time building little worlds together. I personally prefer to find wooden figurines when I can, and love these little wooden people we have painted. They don’t have faces or anything, leaving everything entirely up to the imagination. We also have some wooden animal figurines. 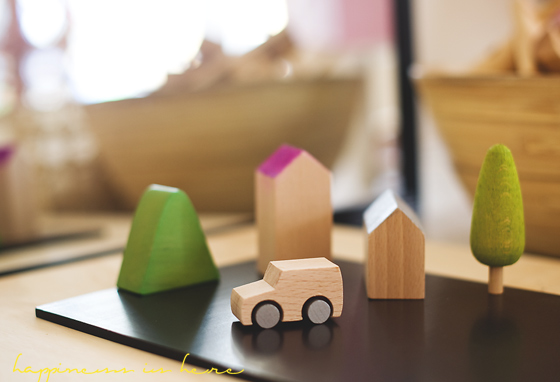 I had been on the lookout for some wooden tree and house figurines to add to our collection, and we were recently lucky enough to be gifted these beautiful little blocks from Krystal at Sweet Elephants. They are magnetized and come with two magnetic boards. As expected, the girls loved them and got to work creating little towns immediately. 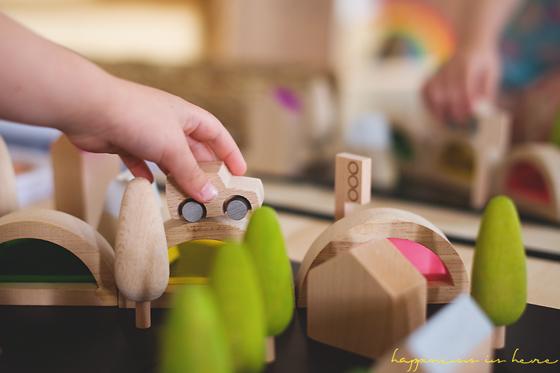 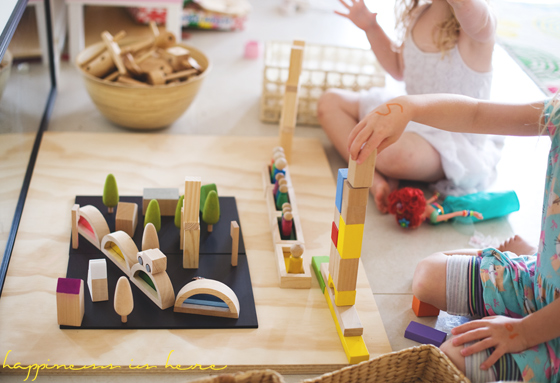 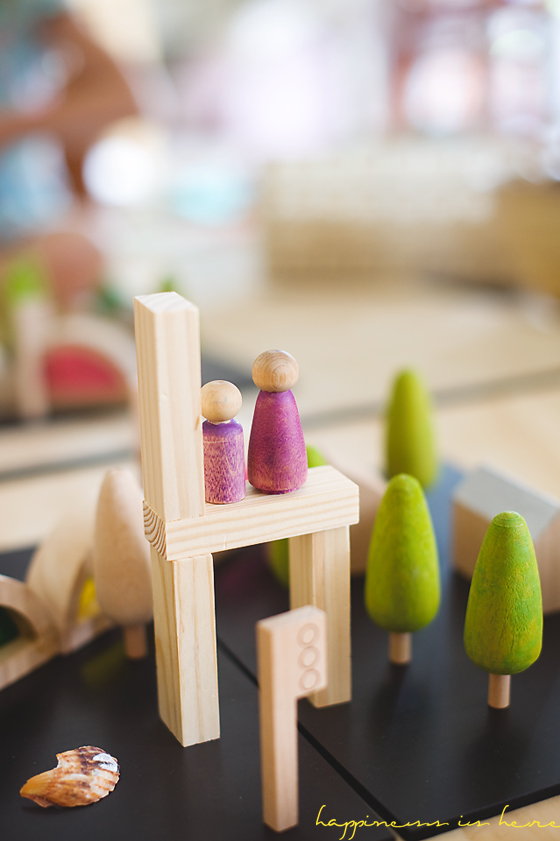 Aren’t they beautiful? I love how simple and natural they are, leaving space for imagination to grow.

My girls love anything to do with art. So one surefire way to get them interested in blocks is by combining them with art materials. 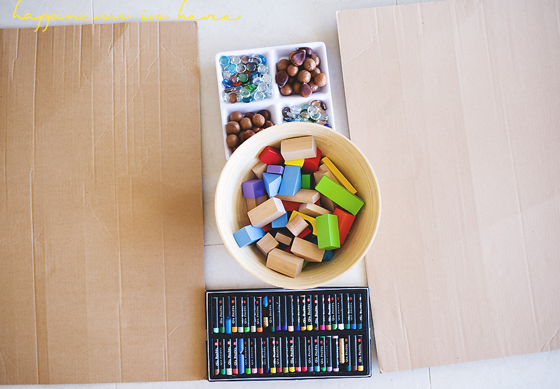 Simply setting out some blocks, loose parts, and oil pastels led them to tracing the different shapes and then building on the cardboard and adding drawings to complete the picture. 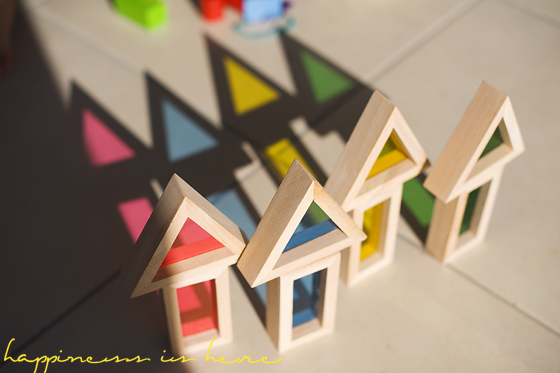 We also recently created some beautiful shadow art outside with the rainbow blocks. 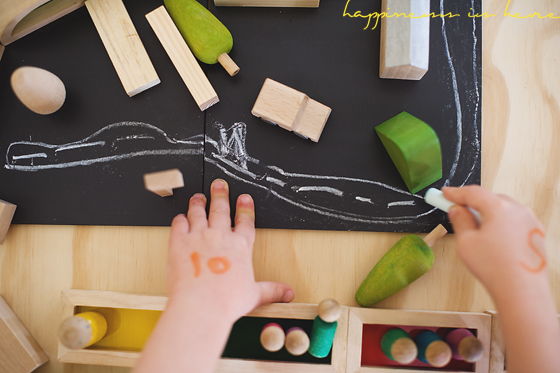 The Machi blocks also come with chalk so that you can draw on the magnetic boards. My girls like drawing roads for the cars. 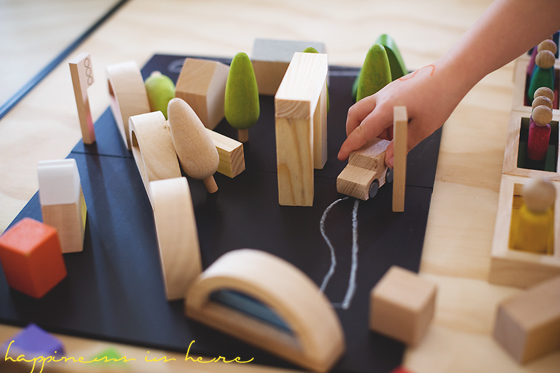 As you can see we have a lot of creativity with blocks happening in our home!

Do your daughters or the girls in your classroom play with blocks? How do you encourage block play?