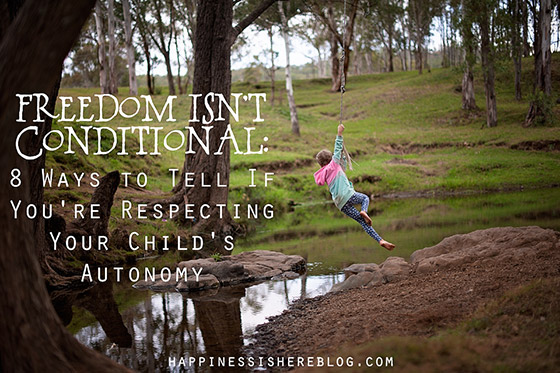 Nineteen kids with no bedtime, free to sleep when tired.

Nineteen kids free to wear whatever they liked.

Nineteen kids who had their feelings heard and respected.

Nineteen kids free to go wherever they chose, play with whoever they wanted.

Nineteen kids free to be themselves.

Nineteen kids who meaningfully contributed to the group.

Nineteen kids who were inspired, free, joyful, and a pleasure to be around.

Thirty-three people living together as equals. 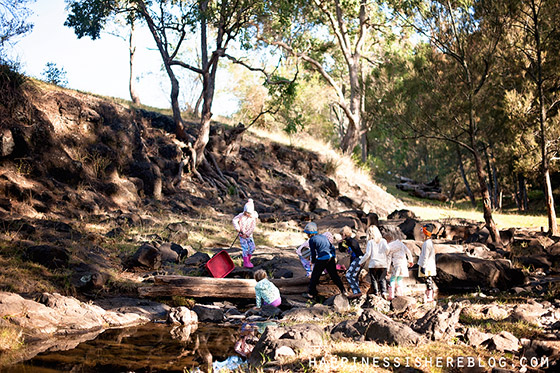 There is really nothing like spending a few days surrounded by so many unschooled families to reinforce to you that you’re on the right track. It was wonderful, and I could not be more certain that this is what children deserve.

All children are equally deserving of respect, trust, autonomy, and freedom.

I hear a lot of arguments against aspects of respectful parenting that go like this… ‘that wouldn’t work for my child because of x reason’.

Now, I want to be clear that I know that every family is unique and things work differently in every home. But the thing is, all children are equally deserving of respect, trust, autonomy, and freedom.

Freedom is not conditional. It is not reliant on children making choices that you would have chosen for them anyway. A child is not ‘allowed’ freedom contingent upon them ultimately doing what you want. That’s not exactly freedom, is it? Nor is it freedom if you will inevitably take the choice away if they do something you don’t approve of.

Freedom is not something to give and take away at your inclination. The point is, it is what children deserve, whether or not it ends up being ‘convenient’. 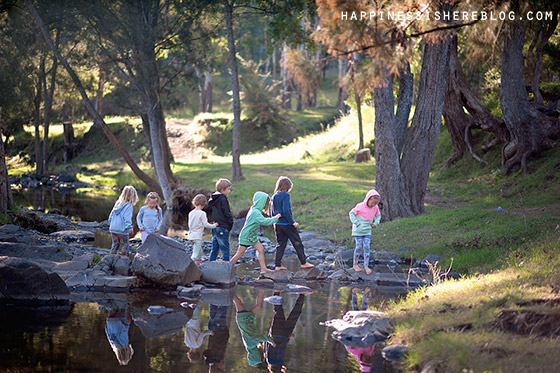 If another person’s autonomy interferes with your needs being met, the solution is not to control them or force them to comply with your wishes. Instead, you would talk to them about it, problem solve, and come to an agreement that you are both happy with. And so it is the same with children. This looks different at different ages, but the principle is the same. Control and arbitrary rules are not the answer.

Yes, sometimes autonomy does need to be overridden by an adult in certain medical circumstances, or when a child needs to be kept safe, but even then this can be done gently and as respectfully as possible. These are not usually everyday occurrences. A child feeling the consequence of tiredness because they stayed up later than they should have is not an emergency. A child choosing not to wear a jacket outside on a cold day is not an emergency. A child cutting themselves a super unique hairstyle right before you take them to a family dinner, maybe awkward to explain to your grandma why you ‘let’ them do it, but still not an emergency.

Our days may be easier if we are in control of what happens and when, but our children pay the price. Things might run more smoothly if you can force a child to sleep at a time that is convenient or run your days to a schedule, but the end does not justify the means. Children deserve to have choices about what happens to them. And if a child ‘thrives on structure’ then surely it doesn’t need to be forced? They can structure their own days in the ways that they need, or you can come up with a consensual plan together. No force necessary.

“No one, of any age, at any time, responds well to being controlled—or patronized. Control triggers one of two responses: rebellion or submission, accompanied by various less than healthy coping mechanisms. It might “work” in the short run, but it’s bound to backfire over time.” –Jennifer Lehr 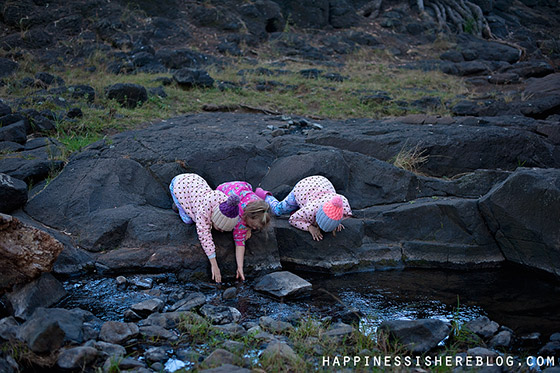 What can we even hope to achieve by imposing our will on our children? They may comply in the moment, but what are they learning? Certainly not to trust and listen to their own bodies. If we truly want them to have the skills we are trying to instil then we must let them practice making their own decisions now, when they are safe and the consequences are small, and we are here to support them. Rather than waiting until they are grown and then thrust out into the world without anyone to dictate to them what they should be doing.

“There’s a big difference, after all, between a child who does something because he or she believes it’s the right thing to do and one who does it out of a sense of compulsion. Ensuring that children internalize our values isn’t the same thing as helping them to develop their own. And it’s diametrically opposed to the goal of having kids become independent thinkers.” -Alfie Kohn, Unconditional Parenting

All children deserve respect, trust, autonomy, and freedom. Sometimes we don’t even realise we are not honoring these rights.

How do you know if you’re respecting your child’s freedom and autonomy? Some questions to ask yourself…

Will you change your mind?

Are you just trying out autonomy as a parenting ‘technique’? If your child chooses something that you’re uncomfortable with, will you declare they are incapable of reasonable decisions and consequently remove their freedom, opting for enforced rules instead?

Remember: Freedom and autonomy are not things for you to give or take away. They are your child’s rights. If you are concerned about something your child is doing, talk to them about it respectfully and let them know your concerns, feelings, and needs. Problem solve together like you would with anyone else! They are capable of this. 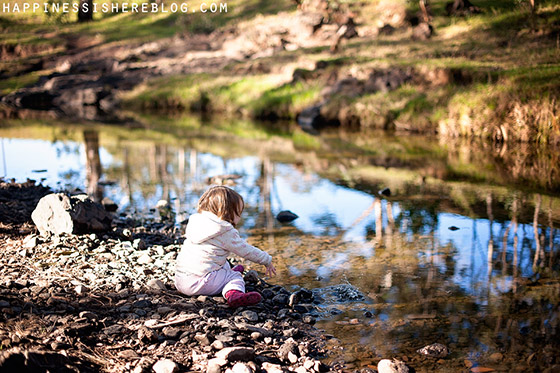 Are you overly invested in the outcome?

We all have certain qualities we would like our children to grow up with, but sometimes we can become overly invested in this image of a child we have in our head while missing the wonderful human that is right in front of us. If we’re too invested in who we think our child should be, we are highly likely to try and influence them in that direction.

Remember: Our children deserve to be unconditionally accepted for the unique people they are. Their choices, appearance, likes and dislikes, are 100% their own. They don’t need our approval or disapproval.

Are you subtly controlling?

Control can be so subtle. It’s so ingrained in our society that children are ours to mould and shape. We do it sometimes blatantly through rules, force, and punishments. Or indirectly through praise and rewards.

Remember: Praise and rewards have the same goal as punishments, to control behaviour. Plus, they’re damaging and don’t even work. Break the praise habit today!

“More worrisome was a study in which young children who were often praised by their parents for displays of generosity tended to be slightly less generous on an everyday basis than other children were—again, just like kids who received tangible rewards. Every time they heard “Good sharing!” or “I’m so proud of you for helping,” they became a little less interested in sharing or helping. Those actions came to be seen not as something valuable in their own right but as something the children had to do to get that reaction again from an adult. In this case, it was generosity that became merely a means to an end.” -Alfie Kohn, Unconditional Parenting

Are you guiding because you want to help or control?

When you offer your opinion or advice, what is your motive? Do you have a genuine desire to help, or are you feeling you need to gain some control over the situation? Or maybe you want to ensure things are more convenient in the present moment?

Remember: Children will ask for advice if they need it! If you really just want to join in or help out then go ahead! But if you think you’re motive may be that you’re wanting to control the situation, holding back might be the best option. Or even just voicing your feelings without judgement. 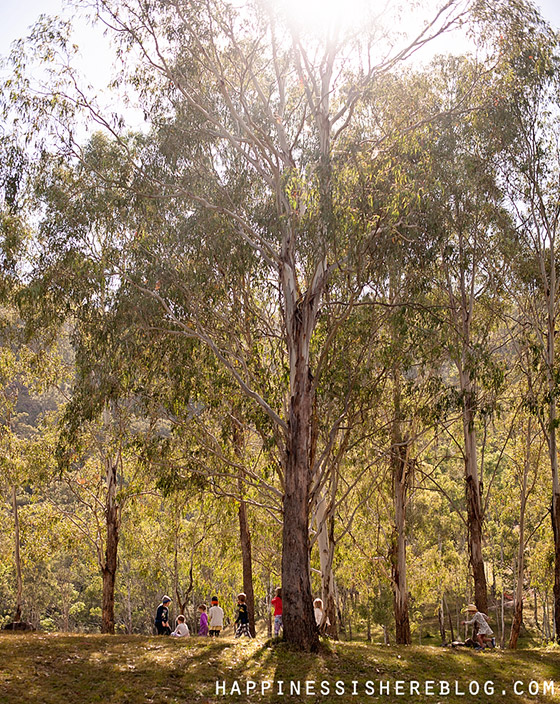 Are you intervening for safety/health reasons?

When you do need to intervene, is it truly a health or safety issue? Sometimes it is and you need to stop something straight away. But sometimes we’re too quick to step in thinking that adults know best and children aren’t worthy of our trust, or capable of working things out on their own.

Remember: A child exercising their rights to decide when they eat or sleep, what they wear, how they spend their time, how high they can climb that tree, who they are friends with…not likely to be health or safety issues.

Are you too worried about the ‘rules’?

Are you too concerned with what other people might think? With how society thinks children should behave? Does that sometimes lead you to restrict your child’s autonomy?

Remember: Your child is more important than a stranger’s opinion. They are free to be themselves as long as they are not infringing on another’s rights.

How would you feel if you were in their shoes?

If another adult treated you the way you are treating your child, how would you feel? Restricted? Untrusted? ‘Like a child’?

Remember: Children are human beings and deserve to be treated with the same respect and consideration as adults.

Are you building connection or comforting fears?

Is the way you are relating to your child building connection between you? Or are you worried about what ‘might’ happen, and responding based on your fears?

Remember: Connection is the key. When you are connected, children trust you and want to listen to you. If you parent with control you have no influence on what your children will do when you’re not around. Lifelong connections are more important than unfounded fears.

“The dominant problem with parenting in our society isn’t permissiveness, but the fear of permissiveness. We’re so worried about spoiling kids that we often end up overcontrolling them.” -Alfie Kohn, Unconditional Parenting 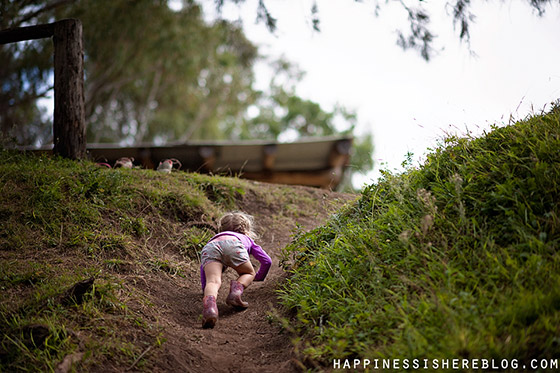 All children are equally deserving of respect, trust, autonomy, and freedom. A child’s behaviour does not make them less deserving of these things. Respect their freedom, and watch them shine. 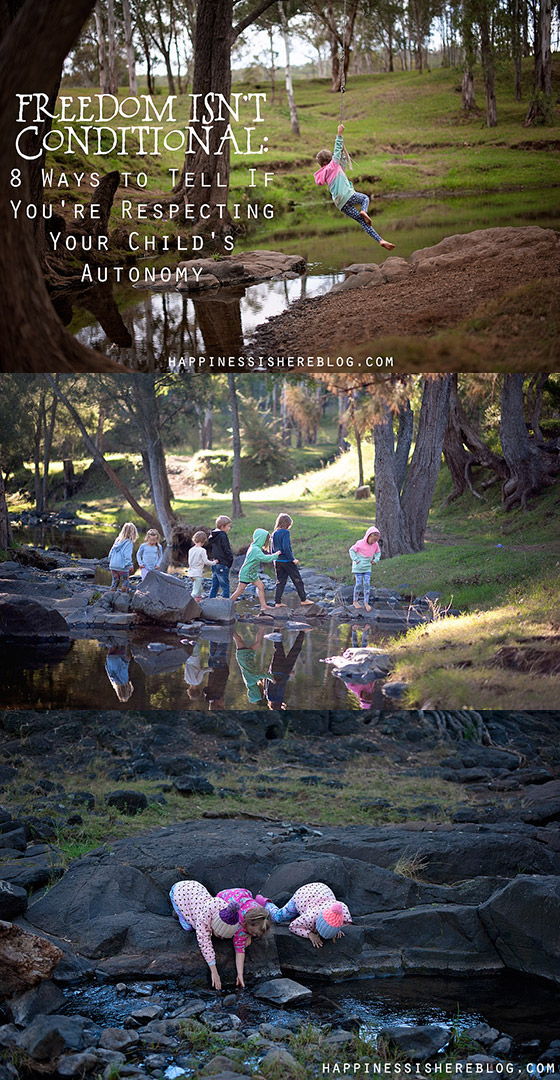 29 thoughts on “Freedom Is Not Conditional: 8 Ways to Tell If You’re Respecting Your Child’s Autonomy”

Miss 5 is so incredibly capable, independent, and