I think it’s sometimes hard for people to understand how natural learning happens. How children can learn enough without being made to sit down and practice certain things. I have heard people say ‘if I did that my kids would watch tv all day’. In my house, that never happens. Learning is not seen as a chore and so they don’t need a break from it, they aren’t trying to avoid it. I thought the best way to show how this actually works was to document a day in the life of my kids and all of the learning that takes place. I chose a day where we had no plans, everything you see is 100% child-led.

They started the day playing together. I think I heard a game of ‘Mum’s and Babies’ (a favourite). They were inside and outside in an imaginary world of their own. I was busy getting ready for the day and giving my 7 month old a nap. At 9am I looked into the playroom to see what they were doing and they had set up a stage ready to put on a show. My 5 year old was writing a sign for the ‘royal performance’ on the blackboard (I love how she spelt performance, ‘pformins’). 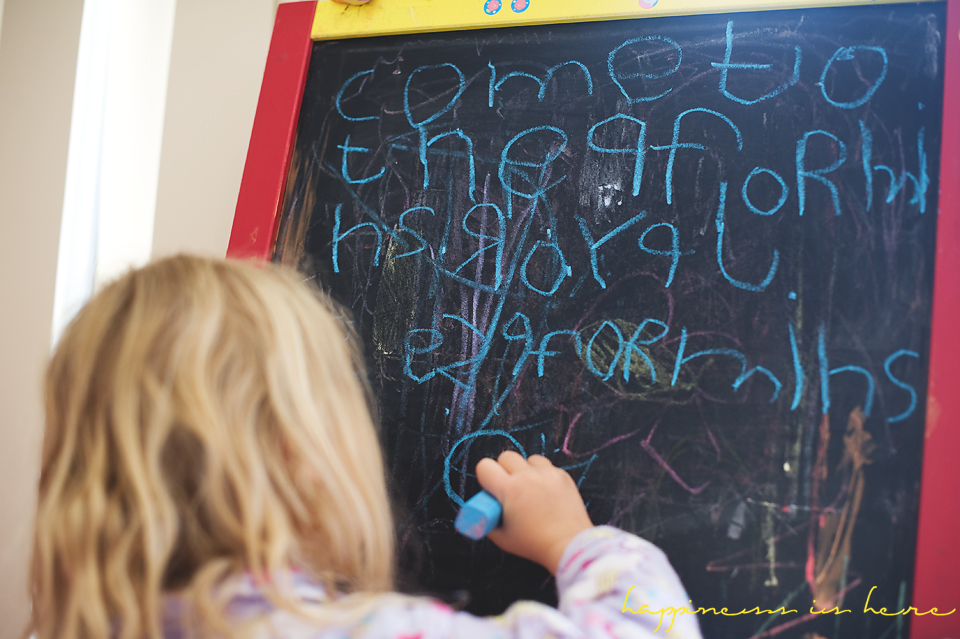 I attended the performance which included a lot of dancing and ribbon twirling. Afterwards, I went to feed my youngest and they kept playing together. 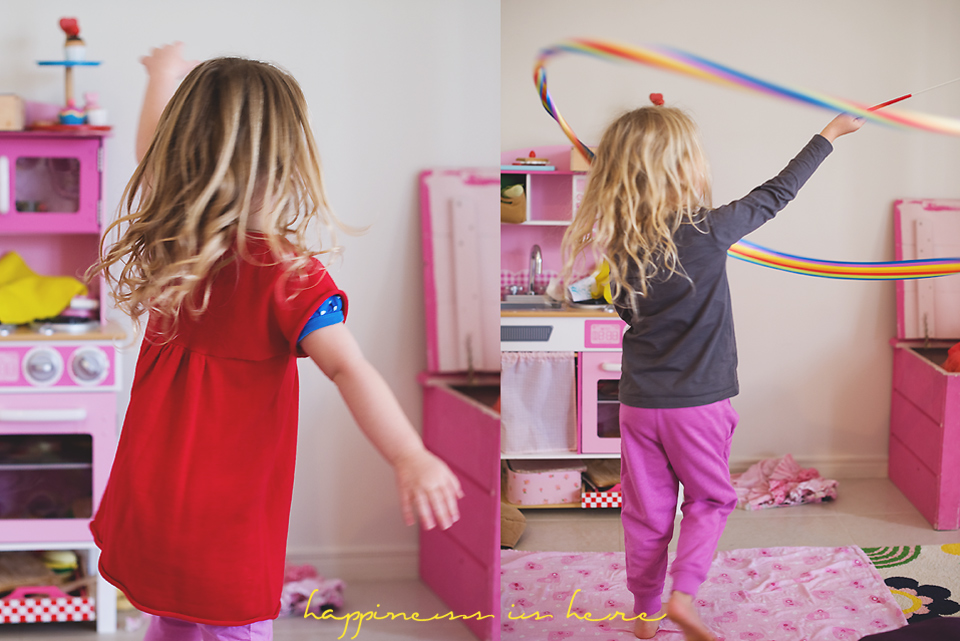 At around 11am I got out some things for lunch, ready for them to chop up and serve themselves. They both love cutting up their own fruit and vegetables. Today, however, they were in the middle of a game where my 3 year old was pretending to be a cat, and of course cats can’t chop up food (silly me!). So, my 5 year old did all the chopping and serving. Never failing to squeeze a bit of creativity into anything she arranged the ‘cat’s’ food into the shape of a mouse. 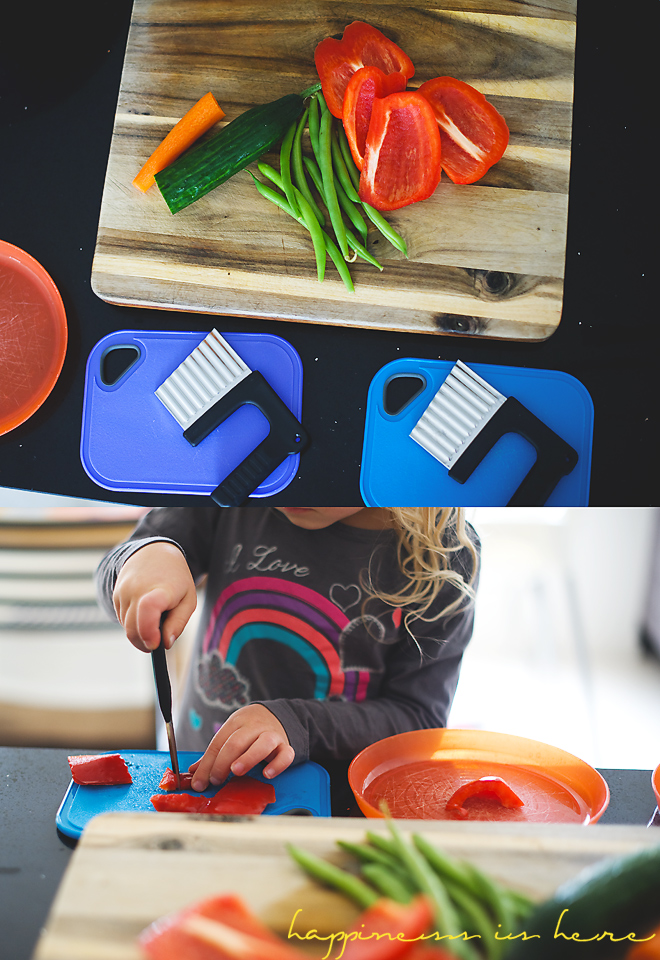 After lunch they went back down to the play room together and got out some play dough. From what I heard they were baking cupcakes in the play kitchen, setting up a shop, and buying and selling food. 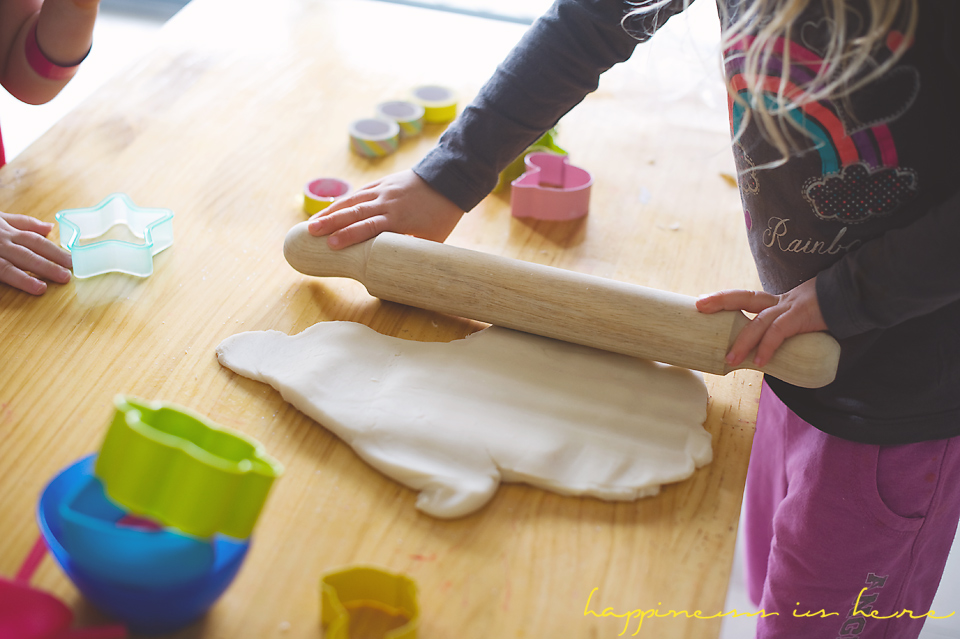 At about 1pm my 3 year old asked me to come and sit with her because she wanted to read me a book. She got one of the readers

, opened it to a page and began pointing out all the letters she knew and telling me what sounds they made. 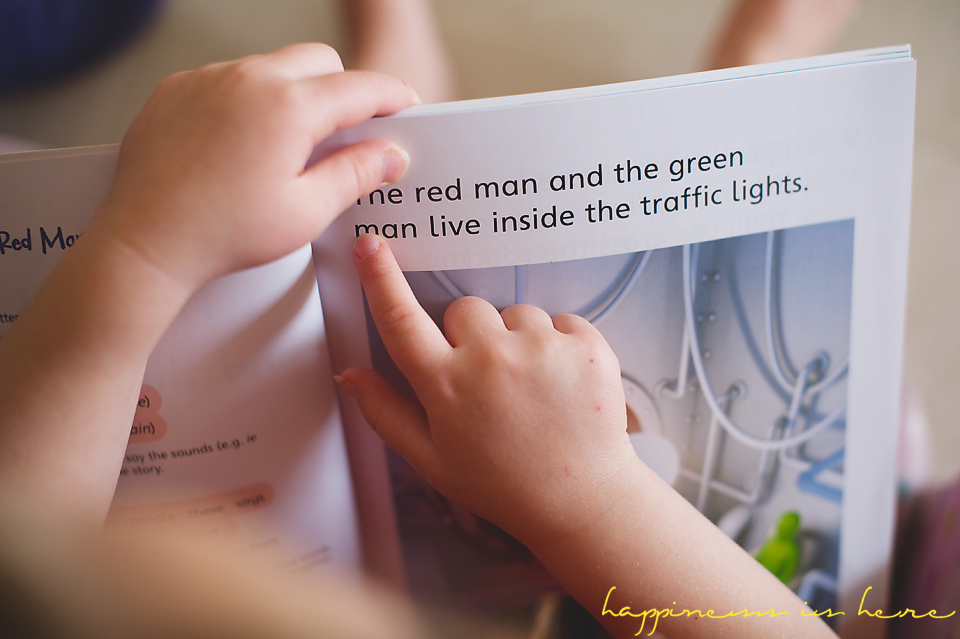 , which is about the sea. The end of the book talks about how the main character realises that all of the animals in the ocean are important and belong in the sea, instead of being caught. This prompted lots of questions and a discussion on ecosystems and how each animal plays an important role. They wanted me to read the book again. This time a certain page in the book captured my 3 year old’s attention. She told me she really loved the blue that they had used and that it was ‘so beautiful’. 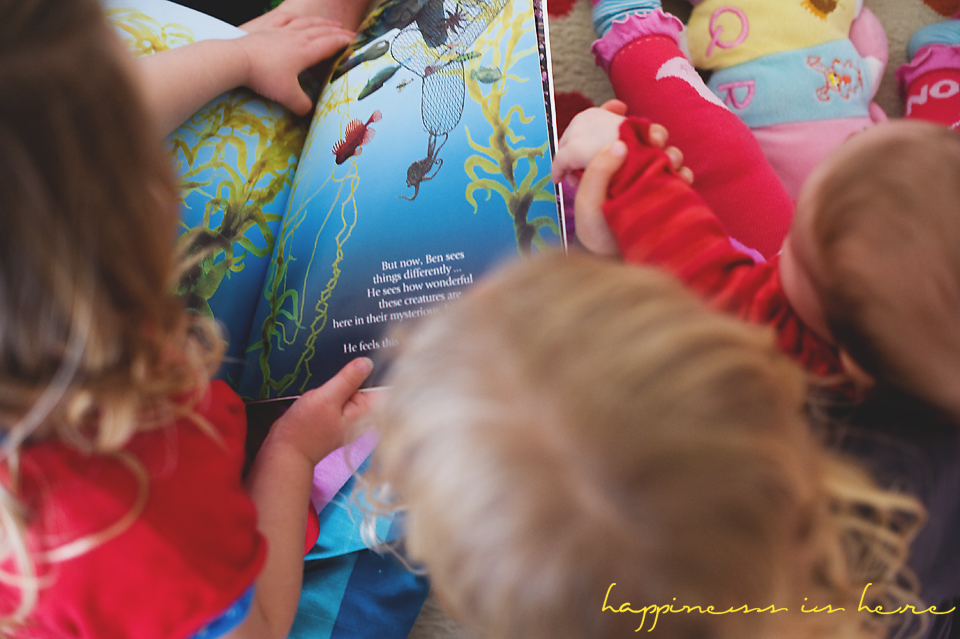 I asked her if she’d ever seen that blue anywhere and did she think she could make it? They both said they wanted to try and make the blue by mixing paint, so we got out some paint pots and spoons for mixing.

A little bit of maths, dividing the paint pots and spoons equally… 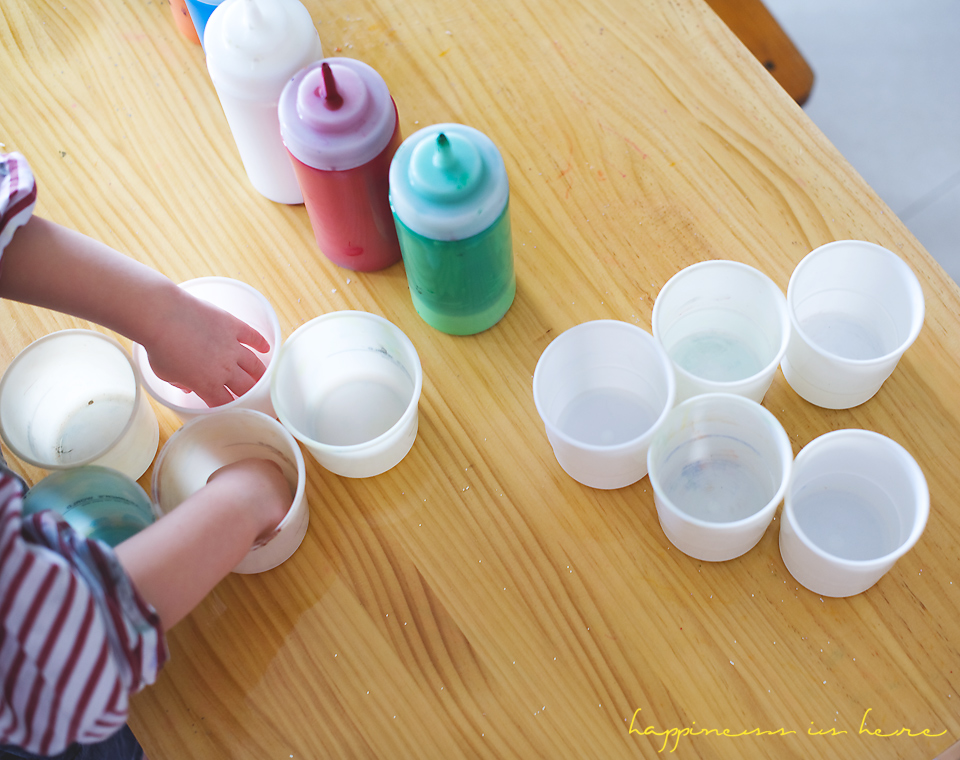 Lots of squeezing and mixing and experimenting… 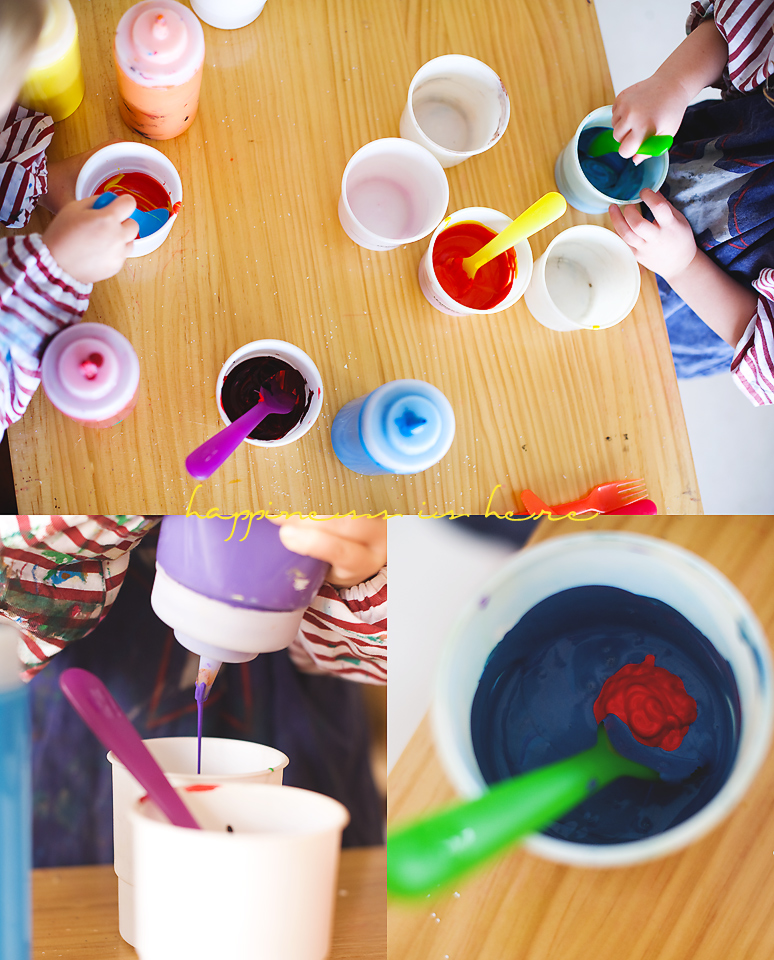 They spent a lot of time doing this, and of course branched out from just mixing blue. So many beautiful new and unique colours. 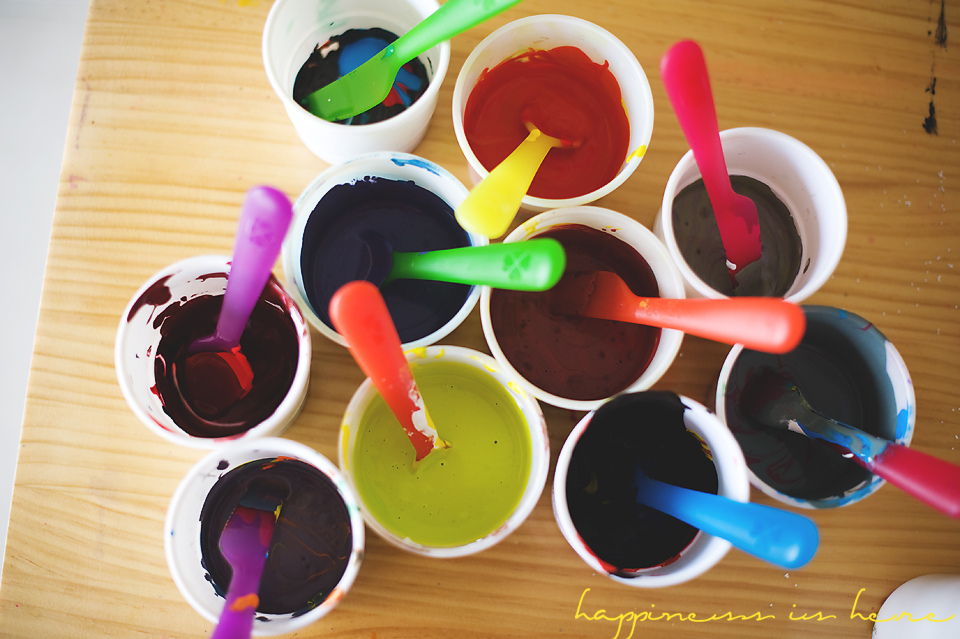 When they were finished they wanted to paint with their new colours. I provided them with paintbrushes which they promptly ignored. They spread thick paint all over their paper and then began to draw and write in it with their fingers. My 5 year old commented, ‘Mum, see how much fun you can have when you get messy!’ 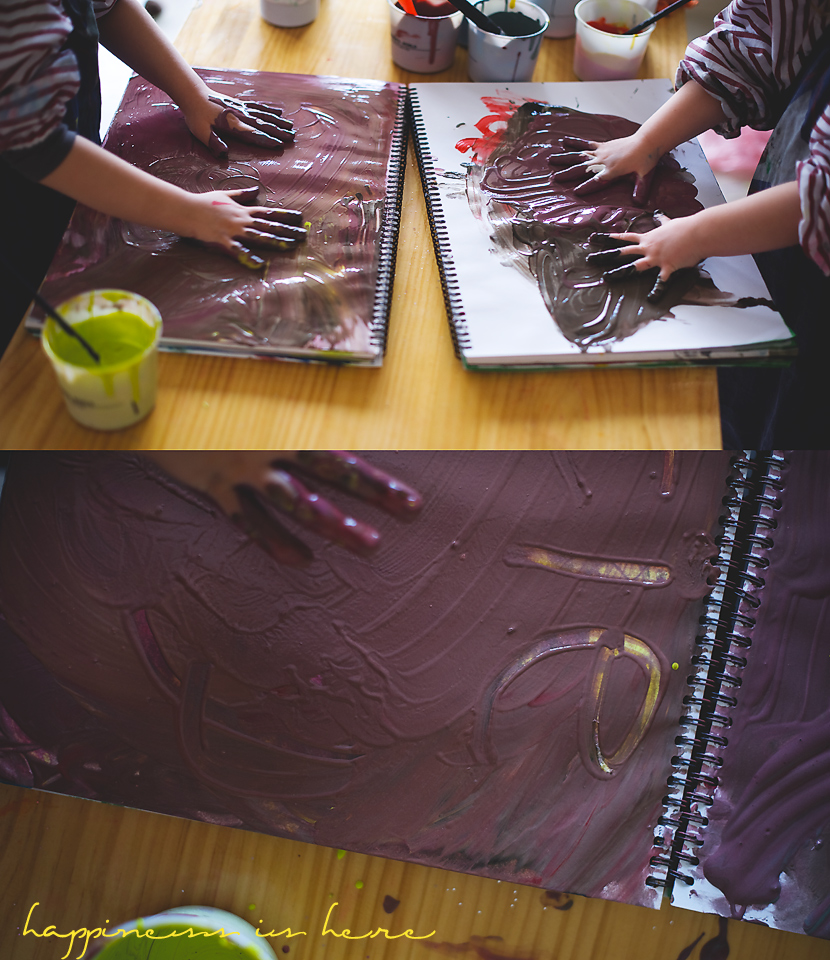 After the clean-up and a snack, they wanted to write stories. I stapled some paper together into little booklets for them and they sat up at the table together to write. 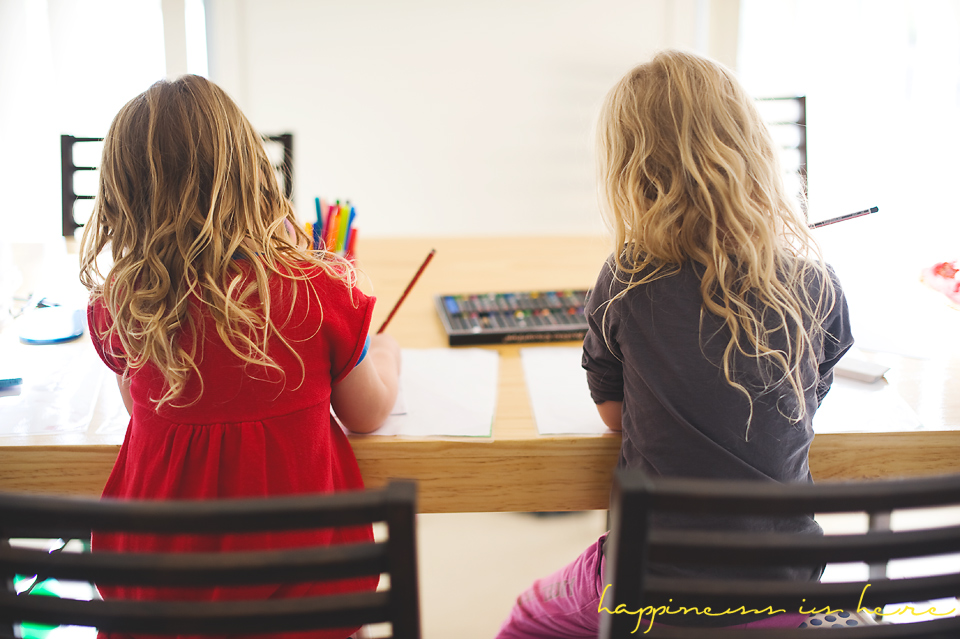 They sat there writing and drawing for about an hour while I got the youngest to sleep. After a bit more play they asked me if they could do Reading Eggs. There was a bit of negotiation over who got to use the iPad and who used the computer but they worked it out themselves. 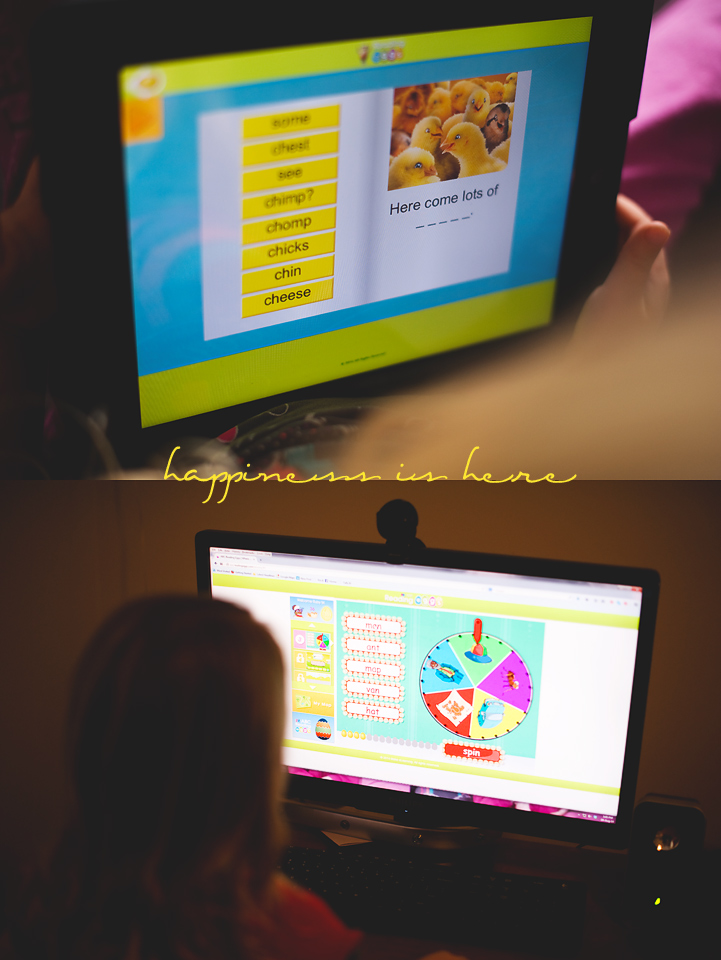 open next to the story she had been writing. She had gone and found one of her reading books from a couple of months ago that she had remembered had the word ‘live’ in it so that she could see how to spell it. 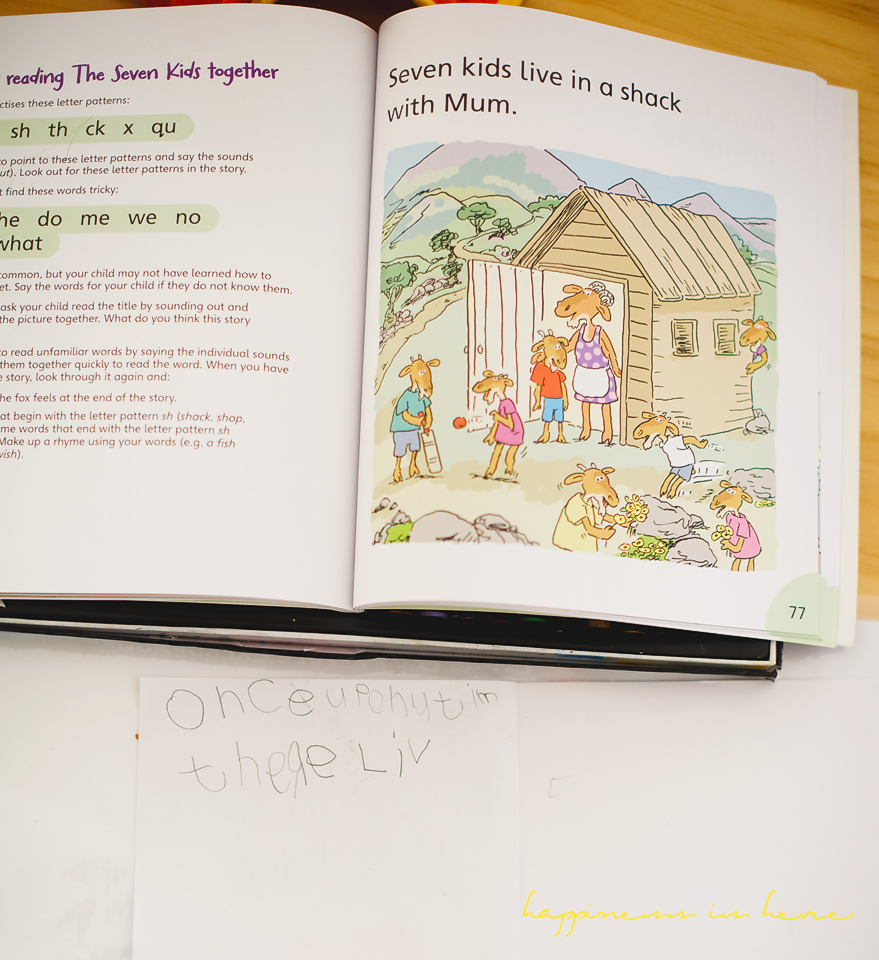 My husband came home from work and my 3 year old finished doing Reading Eggs. My 5 year old asked if she could watch a documentary about bees on the iPad (her current interest). 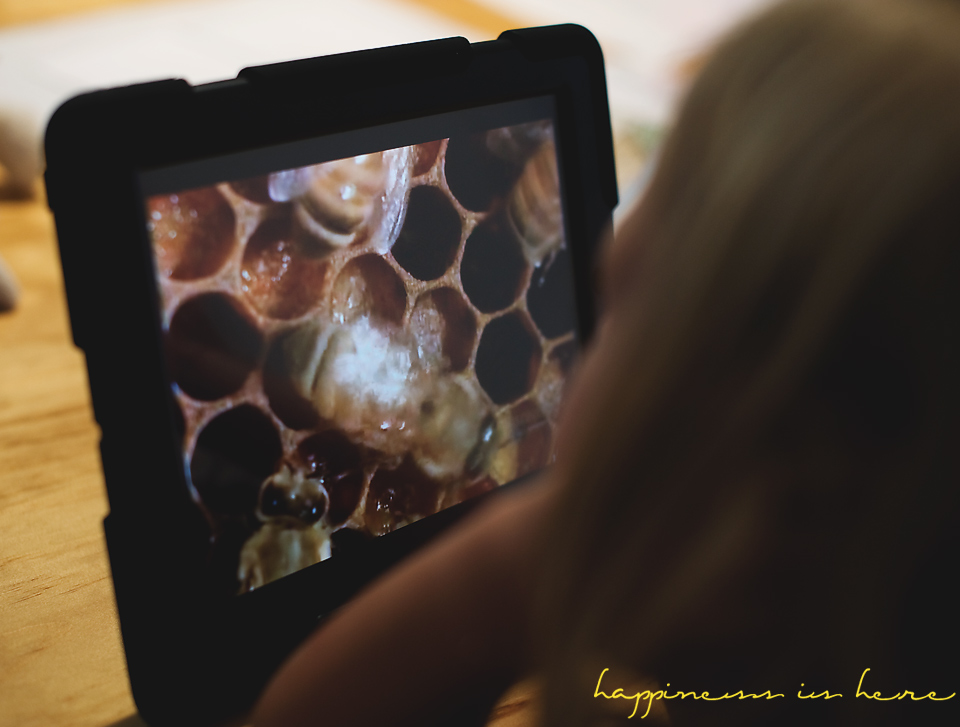 My 3 year old helped her Dad prepare the veggies for dinner. 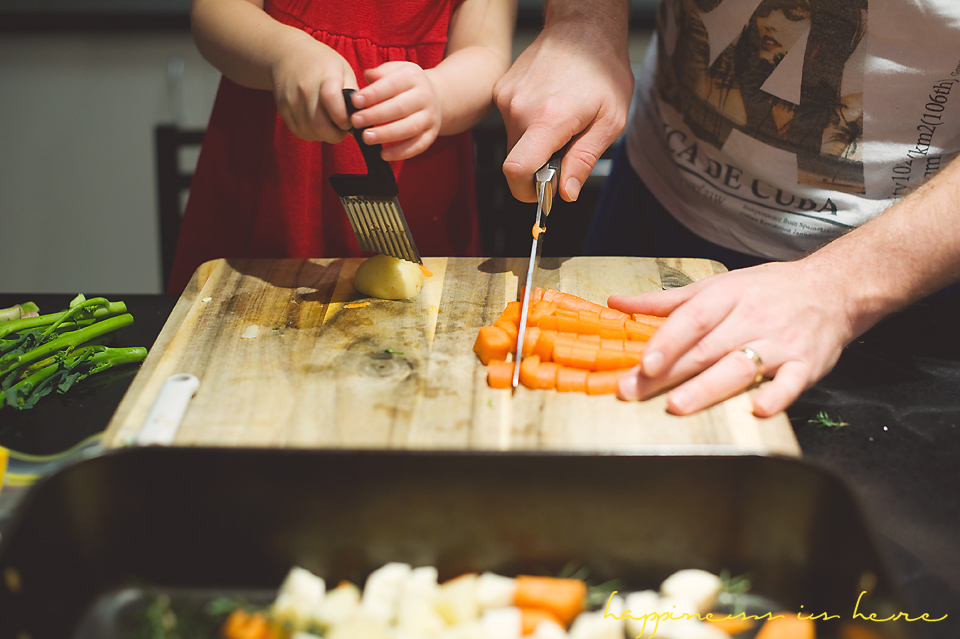 After the documentary had finished my eldest continued writing her story while waiting for dinner. 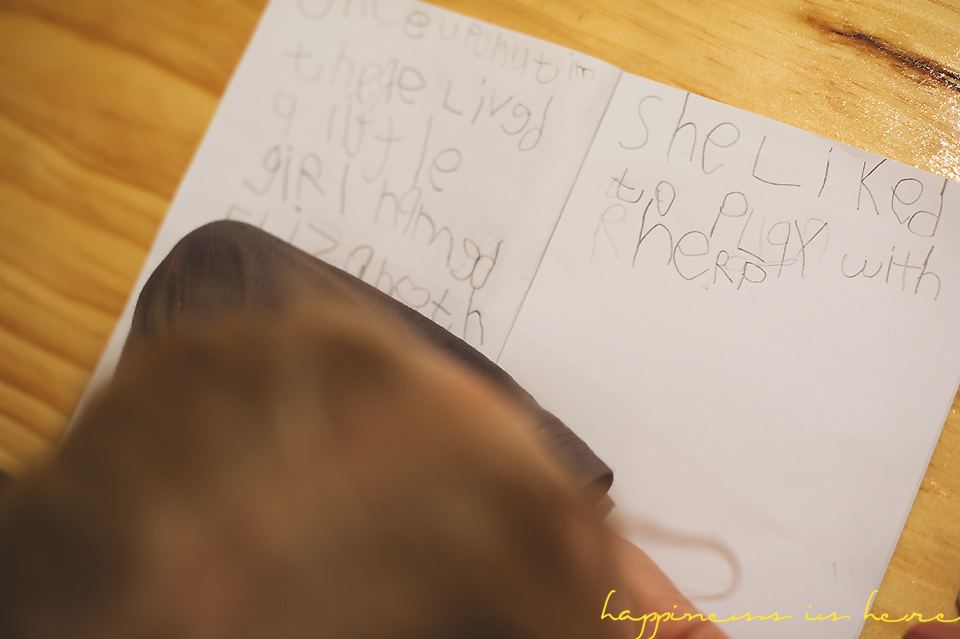 And then it was time for dinner and the usual bath and bed routine! A day with no plans and yet still full of learning. I couldn’t even list for you all of the learning that went on. I have taken photos of the obvious bits but there was probably so much more that I missed or didn’t even notice. Amongst all of this there was hours of play time inside and outside, jumping on the trampoline, playing on the swings, playing with the dog, loads of imaginary play, and lots of fun and laughter. Some of our days are like this, other days we do more. We might be out at homeschool co-op learning and playing with others, have swimming or ballet lessons, or I might have an activity set up according to their current interests. But these days are my favourite, seeing where their questions take us. Even when we have no plans for the day I can always trust they will spend their time productively and their days will be full of meaningful learning.