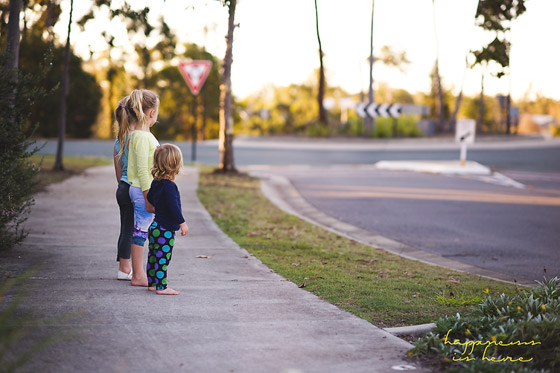 EVERY time I see an article on respectful parenting there is always at least one person (more often more than one) that pipes up with the assertion that if children are not smacked or punished they won’t know not to run into the road and will end up being hit by a car. Though usually it’s written much more rudely than that. I have no idea why this one thing comes up so often, but every time I see it I am baffled. It is said with such conviction that anyone would think that we have an epidemic of unruly unpunished kids running onto the road daily. Yet, I know lots of children who are parented respectfully and I’m yet to see any that sprint for the first available road they come across. My own kids know that the road is dangerous and never to cross without an adult. Shockingly, it is possible to teach kids things without inflicting fear or pain.

Some people seem to have the impression that not punishing kids means letting them do whatever they like and never preventing them from doing anything. Let’s get some things straight…

The point is, there is always time for respectful parenting. Not using punishment does not mean doing nothing. I think people bring up this running into the road scenario in an attempt to say that sometimes you don’t have time to be respectful. But stopping a child from running on the road if you’re in that situation is respectful. You just don’t hit them for their mistake afterwards. You allow them the basic courtesy of talking through what happened and explaining why you won’t let them do that.


I love how your texts just flow.


Wow, I’ve never thought about something like this but it’s interesting that there is such a debate over it. Sometimes accidents just happen, regardless of whether you “discipline” your kid strictly or not. It would simply be a tragedy.


Exactly my thoughts – but articulated much better than I could! My huge frustration at the moment is with others setting a poor example. My 1 and 3 year old are excellent when it comes to road safety (through our vigilance when we are walking near roads, age-appropriate explanations, constant reminders and discussions – this does take effort!), but grandparents proceed to walk on the road and undermine it all. They see how good the kids are at waiting, watching, holding hands, crossing carefully…but somehow missed the blindingly obvious fact that they are setting a poor example. Yes, we might be on a quiet suburban street, but the principles apply, especially to a 1 and 3 yr old.
Anyway, this is probably not the appropriate place to vent about it, but I really appreciated your post and agree wholeheartedly, and wish people would remember that the example they set also goes a long way.


Is there any way I can learn about ‘age appropriate explanations’? I think many times I try to explain sth to my 3 year old and I don’t know if he gets it, sometimes probably not, and I wonder if this is because I need to choose different words or sth or he is too young to understand the concept. It leaves me uncertain about what to do in many situations. Also, sometimes I say I don’t want him to do sth and explain why, but it only wakes up his curiosity to try it and get the proof, which is not always safe.


“How do I stop them running off/onto the road” was something often asked when I worked with families with young children with special needs. It is vital parents understand that they have to be vigilant and hold hands (and if that is tricky, use a pram or a harness). Yelling or smacking or whatever won’t “train” a young child to understand what death means. They are just too young to understand the consequences. I believe the current guidelines around child road safety suggest it’s not until kids are around ten that they really ‘get it’. Like swimming pools and cliffs, the answer is vigilance, not punishment.


“the answer is vigilance, not punishment.” YES!


This is great!!! I love exhibit A. Sharing!


I have never understood the concept of striking a child to teach them not to do something (especially teaching them not to strike). Thank you for posting. I have heard this myself, parents that state ‘I only would spank them if they were in serious danger, like running in the road.’ We cannot teach respect using fear and we cannot teach valuable life lessons using physical punishment.

"There’s the sporty mum who is always out kickin