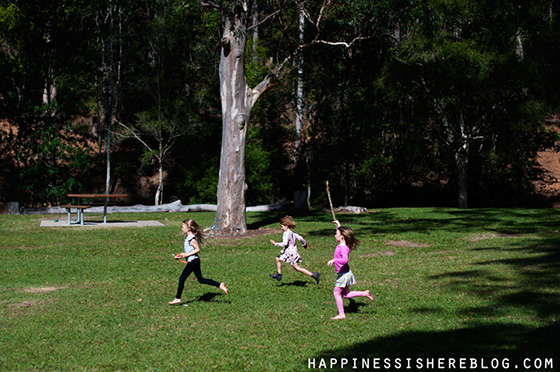 It is a beautiful sight to watch children at play. But, how sad that it is still so devalued.

I often have people comment to me that they could never homeschool their children “because they would just want to play all day”, and it kind of amuses me. They seem to be under the impression that we’re doing something different than that. We’re not.

Our children play all day. So do their friends.

I don’t have strange children who want to sit down and methodically work their way through a curriculum each day. *yawn*. I have normal children. And what do children want to do? PLAY.

The only difference is, I see the value in that.

I wish you would too.

What does it look like to play all day? 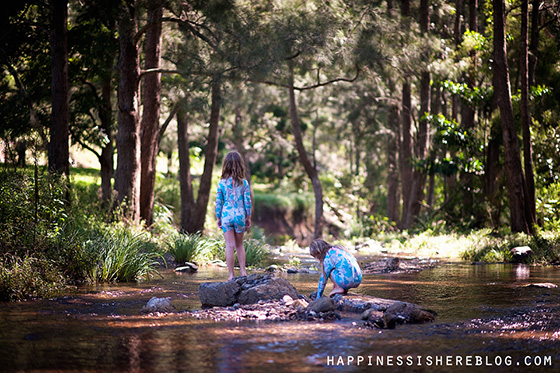 Our children are unschooled, meaning they are completely in charge of their education and are never forced to do any school-type ‘work’. They follow their interests, and they do it passionately. They spend their days playing.

Two days a week we meet up with friends, usually outdoors in nature, and the kids run around all day long just playing. In a time where school recesses are becoming shorter and shorter, I couldn’t be more happy that my children are free to play this way.

When I watch them, it occurs to me that so many people would see this as a waste of time. They might think that they can’t possibly learn all they need to when school usually takes up five days a week.

They see our children just playing outside. No agenda, no attempt to ‘educate’ them, no parent directed activities, no learning resources. Even during the school holidays, most children don’t experience this amount of freedom.

What do I see? I see children engaging with the real world, learning all the time, practicing the skills that will be truly useful in their life rather than memorizing facts that will soon be forgotten. It is not so important what you know, but that you have the skills to learn whatever you need to learn in your life, and a passion to do so. That is the type of education that free play provides.

Skills like problem solving, that can be applied to any area of life, are much more valuable than any fact you want a child to memorize. I am more interested in my children being confident, intrinsically motivated learners, who can learn anything they need, than stuffing their heads full of useless information. 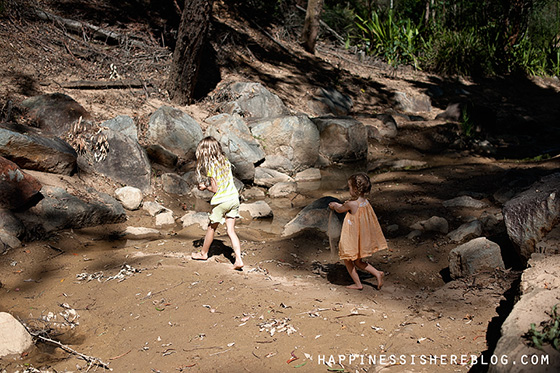 Problem solving in action. There are multiple opportunities for this every day, this is one I happened to capture. Here the girls wanted to get across to the other side of the muddy creek bed, but weren’t sure how to do it without getting muddy. They found some dry sand and worked together to make a path across.

Children are born scientists. They are constantly exploring their environment, asking questions, testing hypothesis, gathering data. All in a much more authentic way than following an experiment written in a text book to get a known outcome. Through play, children make sense of the world. When we take them out of the world and try to coercively ‘educate’ them how we think is best, we rip these opportunities for real, lasting, meaningful learning from their hands. It is so much more powerful to make discoveries for oneself. 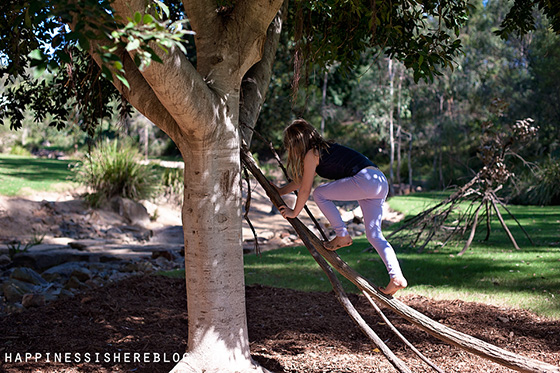 Miss 7 wants to climb a tree but the first branch is too high up. She tries leaning a big stick up against it as a bridge, but finds that it’s too unstable. She can’t balance on the stick without falling and it’s bending in the middle and might break. She moves the stick closer so there isn’t so far to climb and it’s more sturdy, but still can’t balance. She eventually comes up with the idea of putting two more sticks either side for her hands as she climbs, and makes it up the tree.

She is ‘just’ playing, but exploring so many concepts. 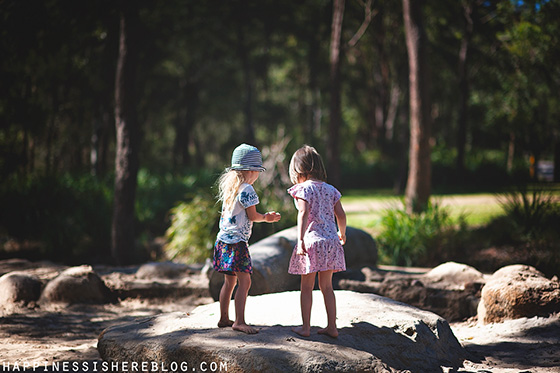 Every time children come together in play, they practice their social skills. They must negotiate what they will play, who plays with who, how to balance the needs of everyone, communicate likes and dislikes, and much more. Social skills are not learned nearly as effectively by sitting next to someone in a classroom, as they are deep in endless hours of free play.

Children gain so much independence from playing outside. They try new things, test their abilities, and feel that sense of accomplishment that is truly their own when allowed the freedom to direct their own learning and play.

Moving your body freely means lots of running, jumping, climbing, hopping, rolling, crawling, and anything else you can think of. Kids were made to move! That’s how they learn. Children who play outside are healthier and have better motor skills and coordination. They take risks, and end up much safer for it. 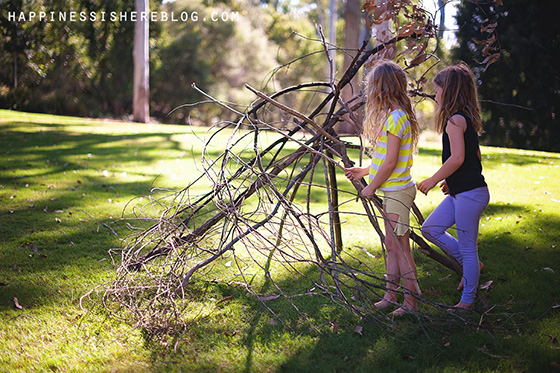 When I watch our group of children play outside, I am blown away by their creativity! The outdoors is the ultimate open-ended toy. It can be anything you want it to be. They are constantly creating and imagining. The future needs creative people with new ideas and innovations.

Caring about the planet 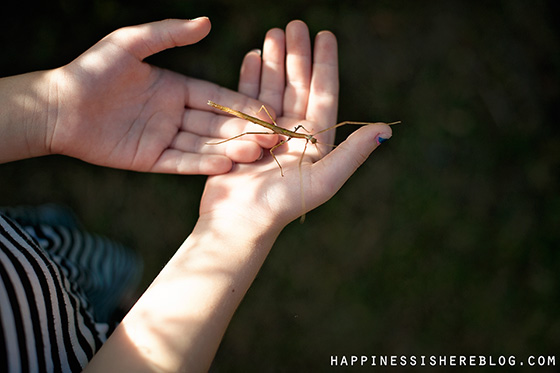 How can you learn to care about our world if you have little experience with it? Children learn to love nature, by being a part of it. They feel how good it feels to be outside and they want to preserve those spaces. They learn about plants and wildlife and how we are all connected and play a part. Nature has so very much to teach us, but sadly most children are prevented from hearing the message.

“When we first take children from the world and put them in an institution, they cry.  It used to be on the first day of kindergarten, but now it’s at an ever earlier age, sometimes when they are only a few weeks old.  “Don’t worry,” the nice teacher says sweetly, “As soon as you’re gone she’ll be fine.  It won’t take more than a few days.  She’ll adjust.” And she does.  She adjusts to an indoor world of cinderblock and plastic, of fluorescent light and half-closed blinds (never mind that studies show that children don’t grow as well in fluorescent light as they do in sunlight; did we really need to be told that?). Some children grieve longer than others, gazing through the slats of the blinds at the bright world outside; some resist longer than others, tuning out the nice teacher, thwarting her when they can, refusing to sit still when she tells them to (this resistance, we are told, is a “disorder.”)  But gradually, over the many years of confinement, they adjust.  The cinderblock world becomes their world.  They don’t know the names of the trees outside the classroom window. They don’t know the names of the birds in the trees.  They don’t know if the moon is waxing or waning, if that berry is edible or poisonous, if that song is for mating or warning.

It is in this context that today’s utopian crusader proposes to teach “eco-literacy.” – Carol Black 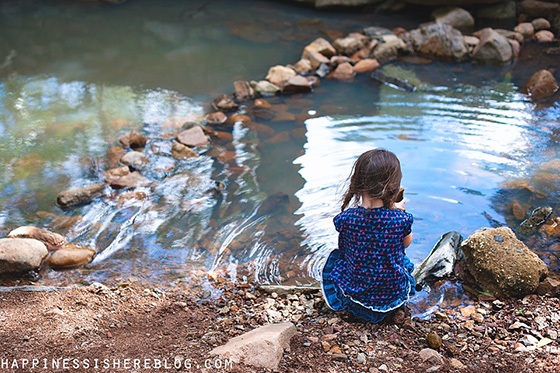 I could go on and on. The benefits of play are immense and it’s impossible to cover them all. But most importantly, I trust my children. I know they are capable learners. I don’t need to know everything they are learning. Evaluating it doesn’t make it more worthwhile. However, I know sometimes the conditioning we received from school makes it hard to trust. I hope these insights into my own children’s experience are helpful.

“Free play is the means by which children learn to make friends, overcome their fears, solve their own problems, and generally take control of their own lives. It is also the primary means by which children practice and acquire the physical and intellectual skills that are essential for success in the culture in which they are growing. Nothing that we do, no amount of toys we buy or “quality time” or special training we give our children, can compensate for the freedom we take away. The things that children learn through their own initiatives, in free play, cannot be taught in other ways.” -Peter Gray

Yes, children can play all day. No, it’s not a waste of time.

Play is where real learning lies.

11 thoughts on “Children Who Don’t Go to School: What Does It Look like to Play All Day?”

Sharing a little more about our 'Adopt a Creek for