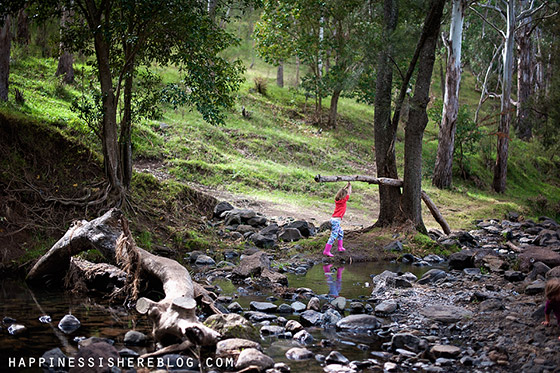 Big fat tears rolled down my 3-year-old’s cheeks. Her loud cries were jarring against the picturesque background we’d found ourselves in.

Her older sister had wandered down the creek bed to find a tyre swing. Such a happy discovery for a child, and of course everyone wanted a turn. She’d been swinging for a while and the others were getting impatient, but Miss 3 was not ready to relinquish her seat, and she was letting us know. 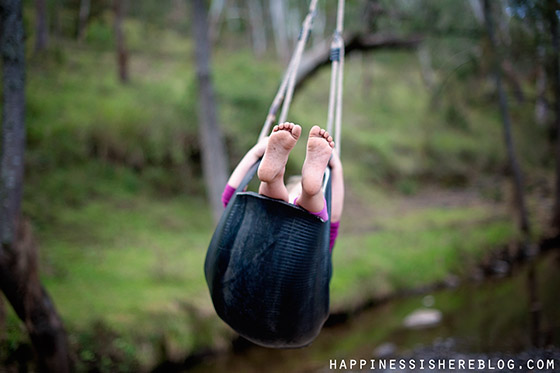 We didn’t force her to get off, just empathised while the other girls looked on. ‘I want to keep swinging!’, she continued to cry.

And then Miss 6, who was waiting to have her turn next, interrupted. ‘It’s ok, she can stay on!’ she assured, and then proceeded to push her while they both giggled together.

It’s not that she didn’t want a go herself. She loves swings and she couldn’t wait for her turn, but she felt for her sister. She knew that this was really hard for her, that she was very upset, that waiting is harder when you’re 3 than when you’re 6. She empathised. 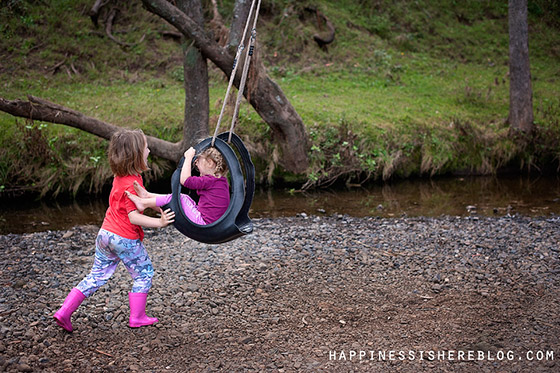 I often hear that children are selfish and that empathy is something we need to actively teach them. But the above scenario is not an isolated incident. Children demonstrate empathy from a young age.

When my children were babies they would cry or mimic facial expressions when their sisters were upset. If I hurt myself, my 1-year-old will ask me in a concerned voice ‘you ‘kay?’ and lovingly pat my cheek. When her 3-year-old sister is crying she will call for me, ‘Mummy, sissy crying! She needs you!’, while waiting with her until I arrive. Whenever one of them is offered something they will immediately ask for one for each of their sisters. Just yesterday Miss 1 fell and hit her head while playing with her big sister, and Miss 6 said regretfully ‘Oh I wish it had been me instead’. They care for each other and empathise with one another daily.

This leads me to believe that empathy is an innate human quality and not something we need to teach our children so much as nurture and protect while it grows. But maybe one of the reasons that children are seen as selfish is because instead of supporting empathy development, we actually hinder it with some common parenting practices.

Research suggests that our own experiences and feelings distort our ability to be empathetic towards others, and this seems to be exactly what we do to children. We intervene in social situations to punish, shame, dismiss, praise, force, and many more things that cause either positive or negative feelings, leading children to be so focused on their own emotions and reactions that they are no longer able to empathise with others. We step in and control situations, or lay down rules, instead of allowing children to learn from social interactions.  We shut down opportunities for children to feel empathy, which in turn leads us to believe they are selfish, and then we decide they need to be taught to be empathetic.

Maybe it’s a whole lot simpler than that. Maybe we should just stop messing with empathy development in the first place. 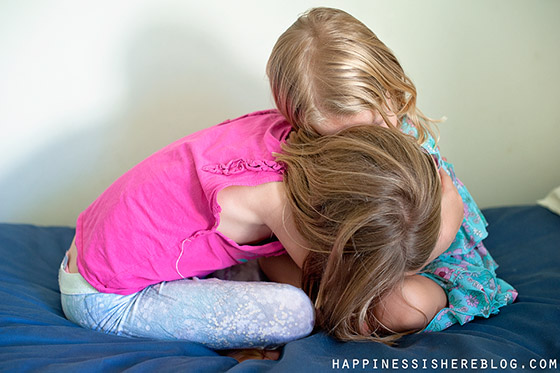 Firstly, the whole idea of forced apologies is bizarre. Does anyone actually want an apology that isn’t genuine? Didn’t think so. By forcing children to apologise we are not teaching them anything. You can’t make anyone feel sorry. Instead, what likely happens is that they are too busy thinking about their own embarrassment and shame to be able to feel any genuine remorse or empathy. They’re probably also running through some ideas about how not to get caught next time so they can avoid this scenario in the future. While it makes you feel good when your child says sorry, and you avoid the judgement of others, you’re really not cultivating genuine empathy so it’s time to reassess your priorities.

What to do instead: Empathise and talk about what happened without judgement! Encourage them to notice others feelings and needs… ‘You really wanted the toy that your friend had. It’s hard to wait your turn. It looks like she’s upset because she wanted to continue playing with it’. Empathy comes from being able to perceive another’s feelings and perspective, so model that for them. Then you can help them work out what to do next, and assist both parties to communicate their needs.

“…one experiment after another has demonstrated that rewards are not only ineffective—they’re often counterproductive. For example, researchers have found that children who are rewarded for doing something nice are less likely to think of themselves as nice people. Instead, they tend to attribute their behaviour to the reward. Then, when there’s no longer a goody to be gained, they’re less likely to help than are kids who weren’t given a reward in the first place. They’re also less likely to help than they themselves used to be. After all, they’ve learned that the point of coming to someone’s aid is just to get a reward.” -Alfie Kohn

Punishment, rewards, and praise completely undermine empathy development, in that they very effectively turn the focus onto what the child is feeling. They kill intrinsic motivation and encourage egocentric thinking. Instead of noticing how their actions affect others, children are concerned with imposed consequences or rewards. If you hit your brother and are sent to time out while your brother gets to continue playing it’s highly unlikely you’re going to be sitting there empathising with him. No, you’re going to be resenting him and the person who is enforcing this punishment and working out a way to get even. Rewards and praise, although more palatable, are no better. Both seek to influence and control children.

What to do instead: Educate yourself on unconditional parenting. Alfie Kohn’s book is a fabulous place to start, and I highly recommend it.

You might also find these posts helpful:
Parenting Without Punishment: What DO You do?
What is Respectful Parenting?
Unconditional Parenting
Freedom Is Not Conditional

The whole sharing thing that parents seem to be preoccupied with is very strange. ‘Sharing’ seems to mean immediately giving up an object whenever another child wants to use it. When does this happen in adult life? If you own something, you don’t have to share it if you don’t want to. If someone wants to borrow something you’re using, they ask, and you tell them they can have it when you’re done. So why on earth do we have these odd rules for children? The concept of ‘sharing’ as it is often enforced with children, bears no resemblance to adult life. It’s also another way we hinder empathy development.

Research has shown that when children share autonomously they display greater happiness than when forced to share. Isn’t that what we want? For them to share out of the goodness in their heart and feel good about it? But instead of sharing authentically, they’re often forced, causing them to feel resentful and mistreated rather than generous. Or else they do share naturally and then we jump in and praise them for it, trying again to control them and reinforce behaviour, which has the opposite effect. 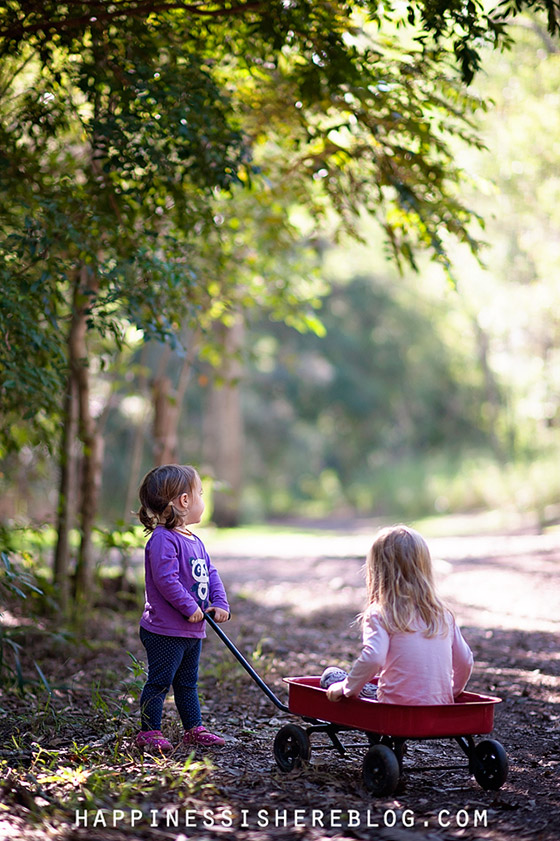 “…young children who were often praised by their parents for displays of generosity tended to be slightly less generous on an everyday basis than other children were—again, just like kids who received tangible rewards. Every time they heard “Good sharing!” or “I’m so proud of you for helping,” they became a little less interested in sharing or helping. Those actions came to be seen not as something valuable in their own right but as something the children had to do to get that reaction again from an adult. In this case, it was generosity that became merely a means to an end.” -Alfie Kohn

What to do instead: Let ‘sharing’ happen naturally! There’s no need to praise it. If you want to comment you could just say something about what you see, “You gave your friend the doll. She looks happy to be playing with it”. Again, turning the attention to how the other person is feeling. Instead of forcing a child to share, tell them to reply that they will let the other child know when they are finished playing with something so that they can use it next. If a child is having trouble waiting their turn, just empathise! It’s ok to be upset. Waiting is really hard when you haven’t developed a clear sense of time yet. You don’t need to ‘fix’ it by making the other child ‘share’ with them.

Competition is detrimental. I know, people don’t want to believe it. There’s a deeply held belief that competition is healthy, builds character, is good for self-esteem, is enjoyable, and gives children a certain drive to succeed. Research, on the other hand, shows many detrimental effects of competition.

“Competition is to self-esteem as sugar is to teeth.” –Alfie Kohn

In terms of empathy development, when we pit children against each other in competition, some must win and some must lose. How can that nurture kindness and empathy? It seems like a no-brainer.

What to do instead: Don’t compare children or encourage them to compete. This only causes envy, disappointment, and disconnection. Instead, enjoy activities where everyone works together to achieve a goal. Be a team! Err…just not one that competes against other teams. 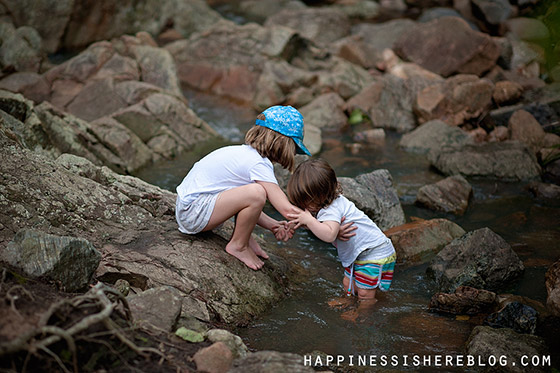 To understand another person’s feelings, we must first understand our own. We can’t do that if our emotional intelligence has been stunted in childhood. If you dismiss a child’s feelings, it is difficult for them to learn how to regulate them, or even be aware of exactly what they are feeling. And if you can’t empathise with how they are feeling, how can you expect them to?

“When little people are overwhelmed by big emotions, it’s our job to share our calm, not to join their chaos.” -L.R. Knost

What to do instead: Accept all feelings! Don’t require them to minimise them for your comfort. Empathise and help them through them instead. You might also find this post helpful.

Children are kind, empathetic, loving, and generally all round awesome people. All we need to do is support that, not hinder it! 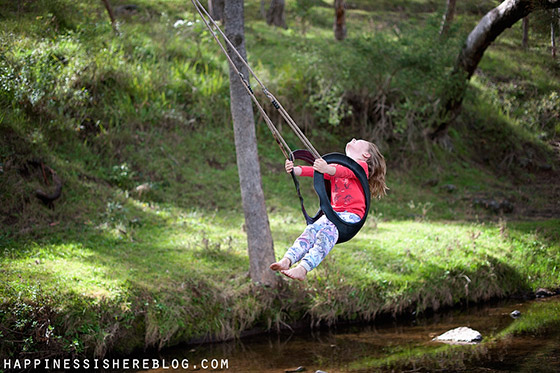 Miss 6 got her turn on the swing, and it was all the sweeter having not been at the expense of her sister’s feelings. 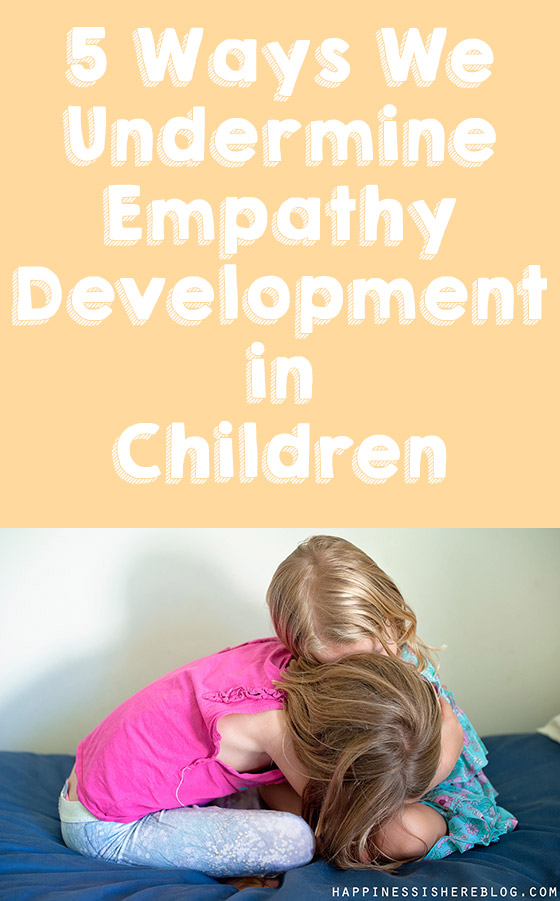 45 thoughts on “5 Ways We Undermine Empathy Development in Children”

Sharing a little more about our 'Adopt a Creek for